Ceramics, glass and iron stand out among the decorative arts presented at the museum, witnessing what is mentioned in the individual sectors; the fire arts naming plays its part. 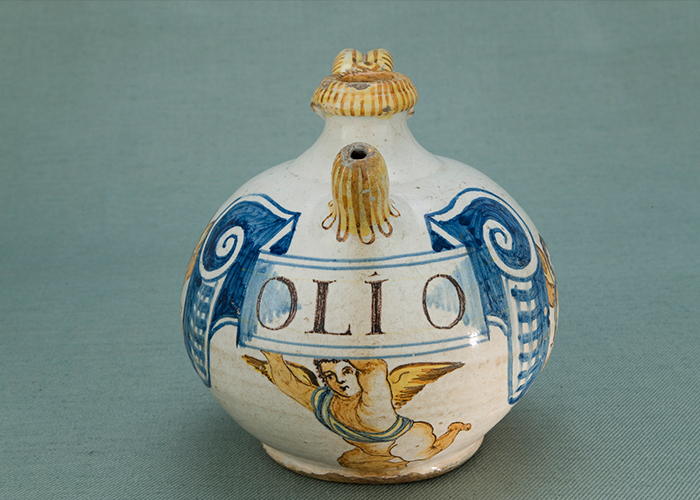 Three vernacular Grottaglie di Puglia containers recall the olives preserved in oil, or otherwise pickled. These became tankards, worn by use, and testify to the relationship – economic and emotional – that is established between man and object even when the latter has become unsuitable for its original purpose. Some oil cruets are exhibited in room VI, they relate to the resumption of olive growing in a niche area. Two of them, for table use (16th century), are enamelled in shades of blue, with the word “oil” in the centre. Next to the others, a large jar of 17th century taste, in glazed and decorated terracotta, comes from the Aretini furnace of Monte San Savino. A remarkable group of ceramic lamps, anthropomorphic and not, constitutes a differentiated nucleus for brio, imagination and usefulness, such as the lamp for the nocturnal hunting, totally unusual. In the Islamic realm, a turquoise lamp with decorations (9th-10th century) stands out. To illustrate the passage from medicine to cooking the connection is entrusted to a group of albarelli (Naples, 18th century) and to Naples still belongs the round oiler with cherubs (18th century)  bearing the word “oil” in a cartouche. 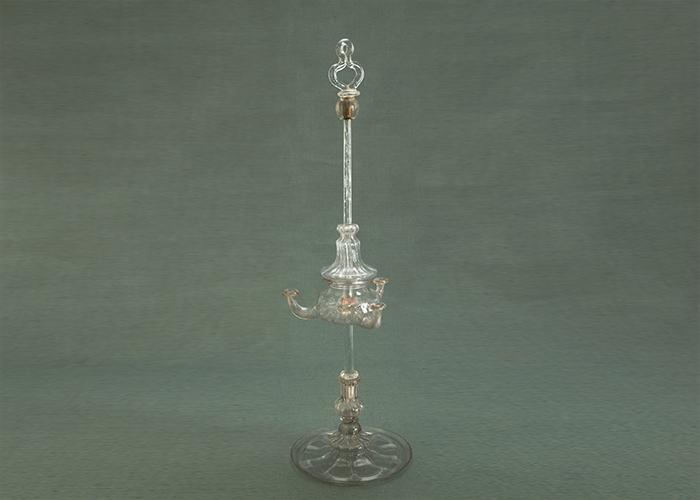 The glassblowing method is known since the Mesopotamian age, its conception in the 1st century. B.C. allows its metamorphosis in consideration of the maximum transparency and freedom of the ornament that can be obtained in this way. At MOO this technique is recurring, see for instance the purplish perfume holder with vertical ribs which developed a strong iridescence (1st-3rd century A.D.). Also iridescent is a footless lamp, in the sector oil as a source of light (5th-7th century A.D.). The unusual 18th century “Florentine” from Murano is of particular interest. Two lace-makers’ lamps (18th century) capture our attention: they are made of blown and ground glass and are similar to others produced by Tuscan glassworks between the 16th and 17th century. The affinity would suggest the production origin, but the ubiquity of lace, imposed by fashion, makes the source more likely to be Burano or Torcello, the places where lace is worked in the open air, chatting over the lagoon silence. Two gemini ampullae (“mother-in-law and daughter-in-law”, 18th century) call for our attention: the green one, Spanish, is enriched with ornaments and volutes; the second, engraved and refined, is from Murano.
In the showcase of oil bottles, the first, made to a design by Juvarra (see his references to Roman architecture), is by the silversmith G. B. Carron (Turin, 1770). Among many others, an Art Deco one by the Manufacture Christofle (Paris, 1925) foreshadows new directions. 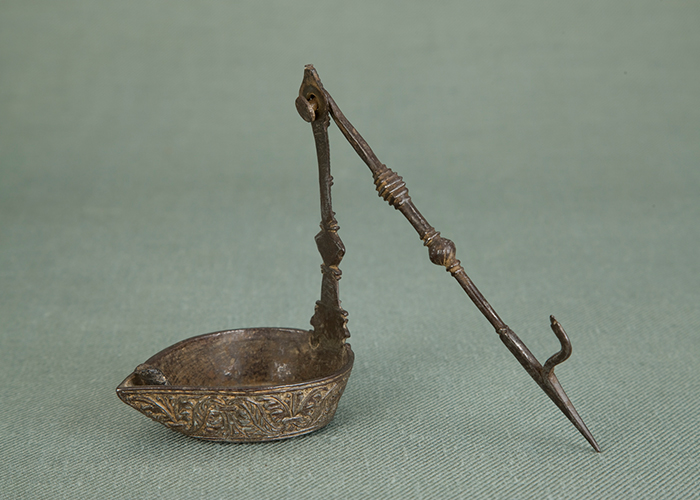 The blacksmith is raised to divinity status in Greece  (Ephesus and his forge in the guts of mount Etna). From the Mesopotamian age, it is a figure of high standing for his power to tame the fire and work it into the shapes he desires: from the scythe to weapons to furniture. In a museum with an agricultural theme, iron is first of all a primary presence in tools; for these, ingenuity and the peasant’s common sense have devised handles stemming from peculiar wood conformations, but “the weapon” is the ancient creature of the blacksmith. Hoe, spade, shovel, saw, hammer, sickle, “malimpeggio” (a chisel-axe) are the tools to which we owe olive growing. Another presence of iron is that of the oil lamps that at all levels make the night practicable, from the street to the stable, to the houses. There are many examples, from the medieval to the generalised hanging “boat” type; among these, one from Siena, so refined as to suggest a goldsmith as its maker. A hint to the kitchen: the andirons are made of iron and so are the handles of shining branches providing safety from the fire.